Photos: 5 Terrifying Stories from Survivors of Bataclan Massacre in Paris

Two British women have revealed how they hid in a cellar for three hours – and heard ISIS gunmen slaughtering concert goers above at the Bataclan theatre.

Best friends Mariesha Payne and Christine Tudhope, from Scotland, said they heard bullets, grenades, explosions and screams coming from above as Jihadi suicide bombers went on the rampage.

Mother-of-two Mrs Payne, 33, said: ‘I never thought I would see my children again. I cannot believe we got out alive.’

Speaking later to Sky News as they arrived back at Edinburgh airport, Ms Tudhope said she initially thought the gunfire was firecrackers. Mrs Payne then saw bullets hitting the stage.

‘A second round went off, most people ducked, but I just said run, just get out of here. In the confusion if we had gone left we would have instantly been out onto the street and probably the first people out of the building, but, just confused, we ran right and ended up being in a room that we couldn’t get out of.

‘There were no exits but we found a door to the cellar, which we just ran into but then realised we were trapped and there was no way out of there.

‘A few seconds later the door burst open and we just thought, they’re coming we are going to die.

‘It was two other concert goers, we managed to barricade ourselves in, turn the lights out and we were then trapped there for the next three hours just having to listen to what was happening.’

The friends said they thought would never get out, and were ‘sitting there waiting to get shot’ as they listened to as more than 80 people being killed above them.

Although they did not think it at the time, they said being trapped in the cellar was ‘a blessing’.

‘We later found out if we had gone left and into the street they were shooting from the windows,’ Ms Payne said. Survived: Mariesha Payne and Christine Tudhope on their return to Edinburgh airport.

Hanna Corbett and Jack Konda, both 21, dropped to the floor along with the rest of the crowd and narrowly avoided being killed as they managed to crawl on their hands and knees to safety as four masked militants armed with AK-47s went on the rampage.

University of Nottingham history student Miss Corbett, from St Albans, Hertfordshire, said: ‘It just feels like a nightmare and so surreal. It was towards the end of the gig and we heard what sounded like firecrackers or fireworks.

‘Everyone thought it was part of the show but then I saw the lead singer’s face turn white with fear and the band fled the stage. They looked so petrified.

‘I’d never heard a gun before and didn’t expect it. It felt like the shooters were near to us. I thought we were going to die. It must have taken about 10 minutes to get to the exit. But everything was moving in slow motion.

Mr Corbett, who is originally from New South Wales, Australia, and moved to London said: ‘When we dropped to the floor, everyone just thought that was it – we weren’t getting up again.

‘I remember looking up and seeing a guy walking around the perimeter of the room with a gun in his hands. He just looked like a normal bloke. He was wearing clothes like a T-shirt and jeans. He didn’t look angry or manic. He wasn’t shouting.

‘It just looked like it was an everyday thing for him. My heart sank and I knew then that is when we needed to get out as fast as possible.

‘I grabbed Hanna’s hand and we just made our way to the exit as fast as possible, while saying low to the ground. It was a bit of a conundrum whether to crawl or stand up and make a bigger target of yourself.

‘There was gunfire erupting behind us but we didn’t turn around. Considering what was happening it was strangely quiet apart from the sound of gunfire, which might have drowned out any screams.

‘I heard gasps of horror. Some people were pretending to be shot and staying quiet. People were on their bellies. Some of them were not moving. It was such a relief when we got out those doors.

‘It was terrifying. Hanna had come to see me for the weekend and I thought we’d go to a rock concert, then for some cocktails and dinner. The next thing we know we were caught up in this.’ 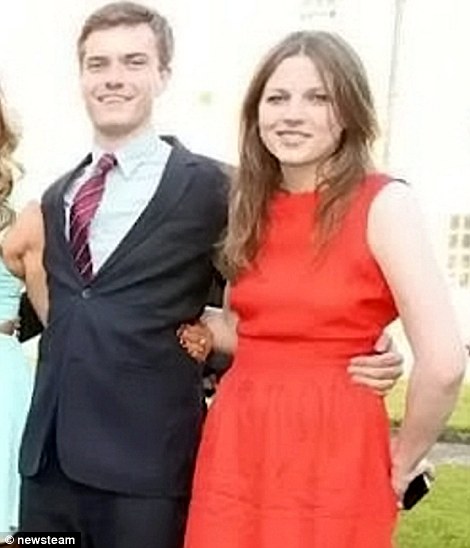 Survived: Hanna Corbett and Jack Konda, (pictured together), were watching rock group, Eagles of Death Metal when the terrorists struck

Survivor Michael O’Connor described how he thought he was going to die during the massacre at the venue. He told how a gunman fired indiscriminately into the crowd, changing the magazine of his automatic rifle as people tried to flee for their lives.

Mr O’Connor, from South Shields, told the BBC of the chaos inside the venue with ‘people falling all over the place, people screaming, people just clawing and running and pushing to get away.

He said: ‘Once I half-realised what was going on, my first instinct was to get me and my girlfriend out of there. The attackers, I don’t think I heard them saying anything or shouting anything or making any demands, they were just firing indiscriminately into the crowds.

‘Once he had emptied the magazines, everybody got back up and tried to make another dash for the exit, and then he just reloaded and started to fire into us all again.’

Mr O’Connor, who described the scene as a ‘slaughterhouse’, lay on top of his girlfriend to try to protect her as people played dead to avoid attracting the attention of the gunmen. 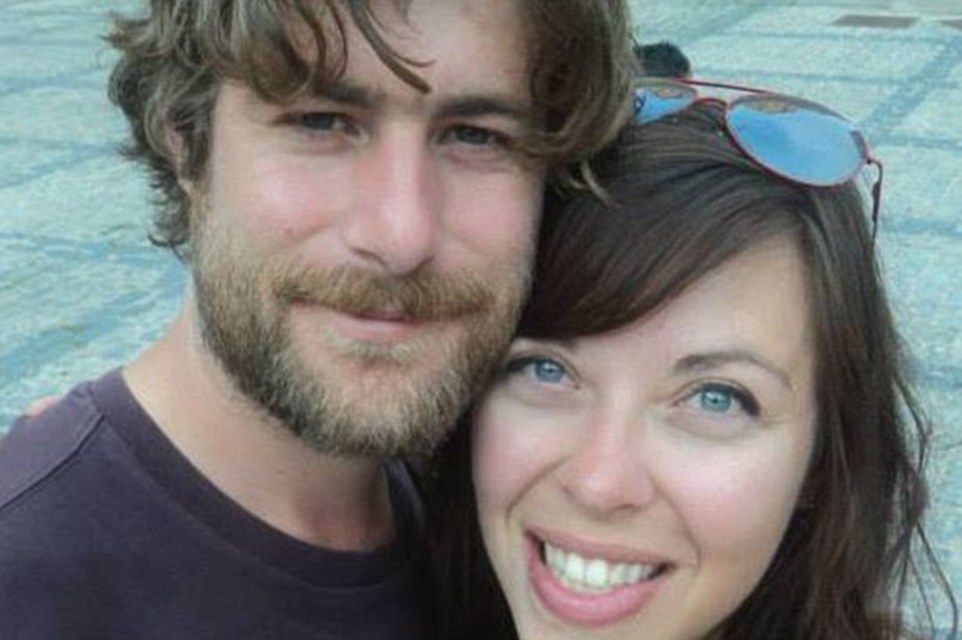 Survived: Michael O’Connor (left), 30, from South Shields described how he desperately tried to protect his girlfriend by lying on on top of her as the massacre unfolded

A 12-year-old survivor of the Paris attacks heard one of the terrorists mention Syria as he lay in fear next to a dead body.

Oscar Leader was with his father John when the horror unfolded in the French capital and the pair have spoken about their ordeal.

Mr Leader said he was screaming out his son’s name as the ‘organised’ terrorists attacked. The pair, believed to be from Australia, were inside the Bataclan concert venue, according to The Australian.

Mr Leader told CNN: ‘We heard this ‘bang bang bang’, and like everybody else we thought it was fireworks or part of the show. Then I felt something go past my ear… was it a bullet or something? I didn’t know what it was.

‘Then I realized something’s coming out, something’s going towards the stage. At that point I think everybody understood. Everybody threw themselves on the ground.’

He added: ‘I saw the two shooters. One was changing his magazine, so he had a whole load of magazines in front of him. He had a big vest on. He looked like a young fellow … nothing particular at all. 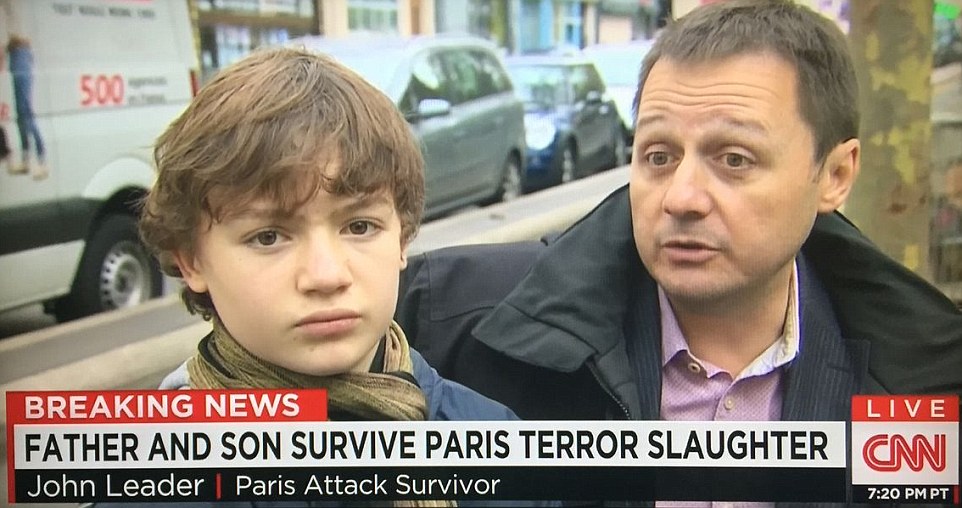 Survivor Isobel Bowdery, 22, told how she played dead as she lay in the blood of strangers for an hour while terrorists circled ‘like vultures’.

Recalling the sound of the cries of people who were holding their dead relatives, Isobel Bowdery said she felt ‘incredibly lucky to survive’.

Alongside a Facebook status that has been shared more than 400,000 times and liked more than one million times, Ms Bowdery posted a picture of the blood-stained top she had been wearing on Friday night.

She wrote: ‘Shocked and alone, I pretended to be dead for over an hour, lying among people who could see their loved ones motionless … Holding my breath, trying to not move, not cry – not giving those men the fear they longed to see. I was incredibly lucky to survive. But so many didn’t.’

She said she had been shielded by someone during the assault, helped in the road by strangers and consoled by people, making her ‘believe this world has the potential to be better’. 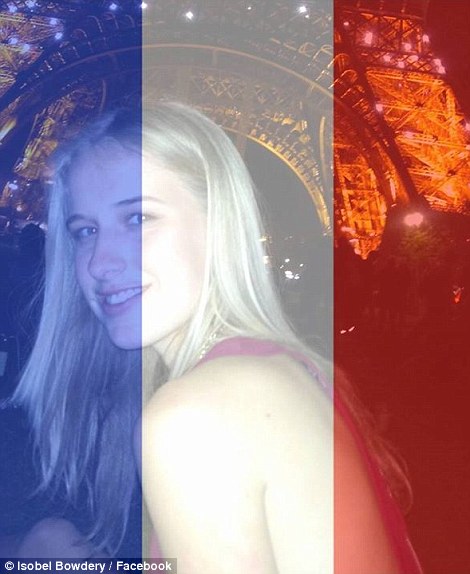 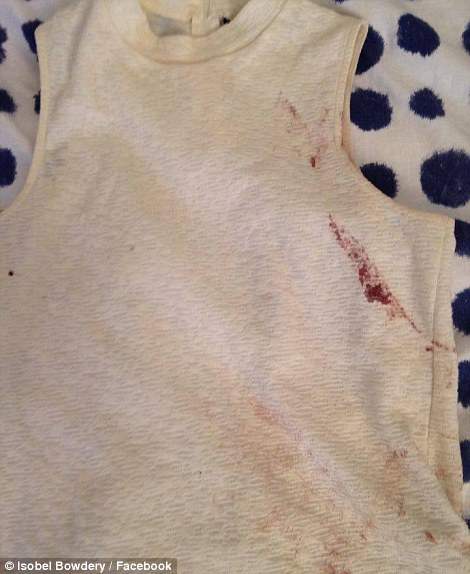 Survivor Isobel Bowdery (left) posted a Facebook status that has been shared more than 400,000 times and liked more than one million times, which showed a picture of the blood-stained top she had been wearing on Friday night (right)