After hedging on the issue for weeks, Donald Trump is pledging he won’t run as an independent candidate should he lose the Republican nomination for President. The announcement may have been overshadowed by what happened outside, however. After the announcement, Trump aides hit and pushed anti-Trump protesters demonstrating on a public sidewalk. NY1’s Josh Robin filed this report.

Protesters clashed with Donald Trump’s employees Thursday as the staffers tried to move and take signs from anti-Trump protesters.

Some along the Fifth Avenue sidewalk were dressed as members of the KKK.

They wanted to draw attention to the Republican’s call to deport millions of undocumented immigrants.

“They took all our banners and stuff. They wanted to rip them up but we rescued some of them,” said protester Efrain Galicia.

Trump aides said the demonstrators were blocking the sidewalk. Police were ultimately called.

The fights came as the Republican frontrunner attempts to broadcast a more tolerant side.

“I love the people of Mexico. I love the Hispanics. I have thousands of Hispanics right now working for me,” Trump said… 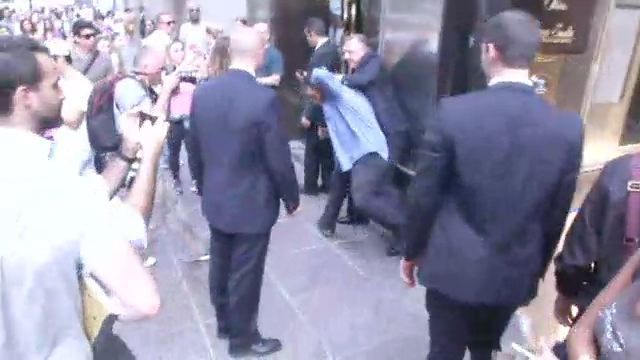 Previous post Officer Surrounded and Heard This: "We Need to Start Killing These Cops"